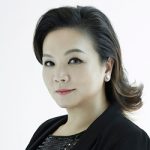 Virginia joined PCCW Media’s Viu streaming platform towards the end of 2019 after more than a decade at Sony Pictures Television Networks Asia in various roles, including senior vice president and general manager responsible for distribution, advertising revenue and overall content strategy for five regional channels – AXN, ONE, GEM, Animax and Sony Channel – as well as vice president for Asian content. Before joining Sony’s Asia networks division in 2008 as programming director for Animax Asia, Virginia worked for Singapore-based pay-TV platform StarHub for about 10 years. Prior to StarHub, she was a current affairs producer for Mediacorp.

Viu has just shattered rights barriers in Japan, continues to cherry pick the cream of Korea, and - among other initiatives across the region - has turbo-charged production in Indonesia, upsized programming alliances in Thailand, set its sights on bigger social TV initiatives, and has a broad ranging slate of local originals. Virginia Lim, Viu's chief content officer, talks about what she would like and how she's going about making it happen.