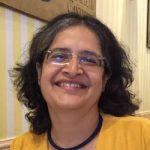 Vanita Kohli-Khandekar is an India-based media specialist. She has been tracking the Indian media and entertainment business for more than 20 years, and is the author of “The Indian Media Business” and “The Making of Star India: The Amazing Story of Rupert Murdoch’s India Adventure”, published by Penguin Random House India in July 2019. Kohli-Khandekar is a columnist and writer for one of India’s leading financial papers, Business Standard, and writes for ContentAsia. She has previously worked for Ernst & Young and at Businessworld magazine. A Cambridge University press fellow (2000), Kohli-Khandekar has taught at some of the top media schools in India. She is routinely called in as an expert speaker on television shows, conferences and other events around the business of media (TV, print, radio, online et al), entertainment and journalism.

The inside story behind "The Making of Star India: The Amazing Story of Rupert Murdoch's India Adventure". Followed by a book signing...

Very few people in Asia’s pay-TV industry don’t have a story about Star. The characters. The crazy. The risks. The bets. The flying by the seat of your pants-ness of the early (and maybe not so early) days. Author Vanita Kohli-Khandekar has gathered the India pieces in her new book, “The Making of Star India - the amazing story of Rupert Murdoch’s India adventure” (Penguin Random House), out this week. Kohli-Khandekar, who has tracked India’s video industry since it was state-owned broadcaster Doordarshan plus some cables thrown over trees, interviewed more than 100 people and spent about 18 months researching and writing the book, which opens with a scene from a fractious meeting in early 2000 in Mumbai, seven years after Murdoch bought Star from Hong Kong’s Richard Li. The 200-page book ends with inevitable questions about Star’s future under Disney, a company it has always dwarfed in India. This book is about more than Star,” she says, adding: “It is the story of Indian broadcasting with Star playing the main role”. Vanita Kohli-Khandekar talks about what went into telling that story, followed by a book signing.