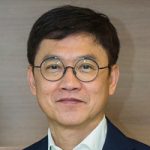 With his long service in media & entertainment business, Krittayaphongphun has widely been recognised as a successful Thailand TV ‘veteran’, experienced in content production and new platform expansion both in Thailand and international market. He believes that good Thai content should not only serve the viewers in Thailand but also to audiences in other countries as well.

Krittayaphongphun and his team’s greatest ambition is to make BEC World drama content well loved by all viewers in any market.

BEC World remains one of Thailand's most significant producers and leads the country's international distribution initiatives with new properties such as "Repercussion" and "My Husband in Law", following established dramas such as "Love Destiny" and "Thong Ek" on domestic and international schedules. The Bangkok-based national broadcaster has also forged landmark partnerships with the likes of Tencent for simulcast rights in China and WeTV in other countries, and has an ongoing alliance with JKN Global Media that has landed BEC World content on mass-market free TV stations in Indonesia, Malaysia, Philippines and Singapore for the first time. Against this backdrop, Thai broadcast veteran, Surin Krittayaphongphun, shares insights about the Thai broadcast market and what he sees as the major challenges on video entertainment, the addition of streaming to a powerful broadcast business, trends and influences in Thai drama production, balancing originals with acquisitions for the domestic market, and ramping up a global presence.