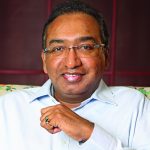 Sameer Nair is a media and entertainment industry pioneer, credited with leading the content team that built Star TV in the early days, including greenlighting “Kaun Banega Crorepati”, the Indian version of “Who Wants to be a Millionaire”, now credited as a turning point in India’s television history. For the past four years, he has been part of a movement redefining story telling in India.

As chief executive of the Aditya Birla Group’s Applause Entertainment, Nair is leading the next phase of the Indian content boom with shows such as “The Office”, “Hostages”, “Criminal Justice” and “Mayangari – City of Dreams” for Disney’s Indian streaming platform Hotstar;  “Mind the Malhotras” for Amazon Prime Video; and most recently, “Scam 1992” for Sony Liv and “Criminal Justice – Behind Closed Doors” on Disney+ Hotstar.

Born and raised in Mumbai as part of a family of teachers, Sameer’s first foray into the media world was a job with Yellow Pages before moving on to Goldwire Communications. He joined the Star Network in 1994. Over a 12-year career at Star, he handled a variety of portfolios and became Chief Executive Officer in 2006. He was responsible for bringing some of the most loved shows on TV, including “Kyunki Saas Bhi Kabhi Bahu Thi”, “Kahaani Ghar Ghar Ki”, “Koffee With Karan”, “The Great Indian Comedy Show” and “Sarabhai vs Sarabhai”, among others.

Nair has also worked for Balaji Telefilms and NDTV Imagine.