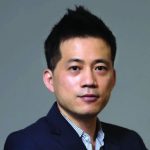 Michael Jung is the Managing Director of CJ ENM Hong Kong Ltd, with an expanded remit as COO of joint venture production house, True CJ Creations in Thailand from June 2021.