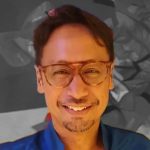 A prominent member of the Nusantara team, Khai spearheads the company’s partnerships with like- minded regional partners to produce high quality premium drama series like “Do(s)a” in Indonesia and “Polis Evo” franchise catering to ASEAN viewers.

A graduate of the Bachelor of Fine Arts from Curtin University of Technology, Western Australia, he has extensive production and broadcasting experience in Mediacorp, Singapore and NTV7 and Astro in Malaysia.