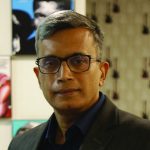 Gaurav has been a professional journalist for more than 24 years. He has worked in leading media houses in leadership positions. He served as Executive Editor of Network 18, Moneycontrol.com, and can be seen regularly on television discussions on policy and economy. Gaurav joined Network 18 from Hindustan Times where he worked for more than a decade in various capacities including the Economics Editor. He is a trained economist with a Masters in Economics from the Delhi School of Economics.