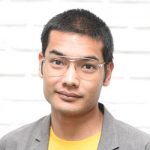 Mom Rajawongse Chalermchatri Yukol (M.R. Adam) – the son of His Serene Highness Prince Chatrichalerm Yukol and Kamla Yukol Na Ayuthaya – has been involved in Thailand’s production industry since he graduated with a degree in film and television from Bond University in Australia. He was producer and director of “Sarawat Maba” (“The Cop”) and “Phi Ha Ayothaya” (“The Black Death”), co-director of “King Naraesuan” (the film) and the director of “King Naresuan the Series” featured on Mono29. M.R. Adam founded Fukduk Production Co Ltd, which is, among other ventures, involved in 28 online channels, nine blogs, as well as pioneering live streaming media on the internet, and remains president of Bison Idea Co Ltd. In his role as programme director of PCCW OTT (Thailand), he is responsible for controlling, acquiring, and monitoring all content on the Viu platform, including creating and featuring content through different social media channels.