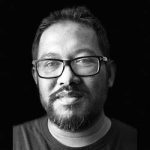 Azuan Muda is the co-founder of Teeb TV, the “Netflix for Indies”, a multi-platform media company streaming 100s of independent short films, featured films, clips and music videos particularly from Indonesia. He used to produce independent films like Sepet and Muallaf and PETRONAS commercials with a production house based in Kuala Lumpur. Prior to this, he was an investment banker based in London. Azuan Muda received his Bachelor degree in Accounting and Business Information Systems from University of Manchester, U.K.